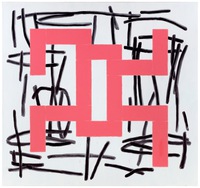 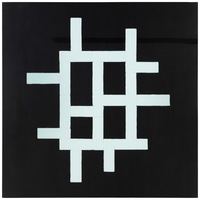 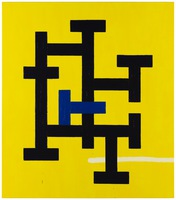 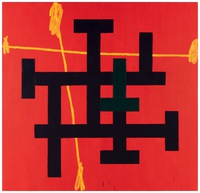 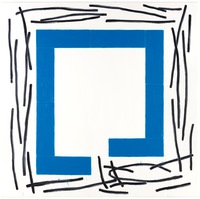 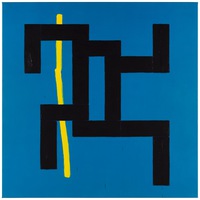 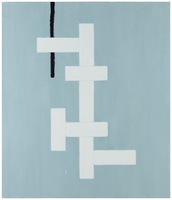 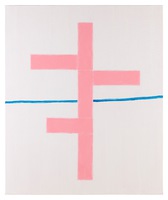 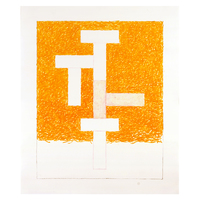 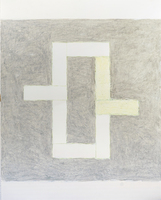 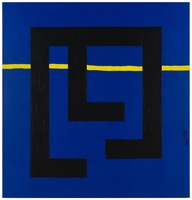 Traditionally speaking, Stig Baumgartner (b. 1969) paints abstract compositions, for his paintings depict nothing immediately recognizable.They nevertheless have a figurative quality: there is a distinct foreground, a figure, and a background. His style might thus be described as figurative abstraction. His paintings combine two different stylistic devices: organic lines that bring the surface to life, and solid, geometrical forms arranged in angular compositions. His treatment of line is like handwriting, coloring and filling the surface, accenting the painting's physical presence.

Each of Baumgartner's paintings comprises an equal number of interconnected vertical and horizontal geometrical elements. The vertical-horizontal dialogue is an allusion to contrapposto, the classical rule on how the dimensions of the human body are grouped into a harmonious whole that violates dynamic symmetry. The geometrical elements in his paintings never stand alone; they are always connected, like body parts. The patterns they form on the canvas can alternatively be interpreted as architectural spaces. Their spatiality evokes a connection between corporeality and how we experience architecture.

The title of the exhibition refers to mathematics, suggesting how even the most insignificant-seeming form can easily lend itself to becoming a significant motif. Random geometrical forms and free lines are anonymous by nature. Just as geometrical forms occasionally appear as figures with a distinctive character, the linear patterns not only fill the surface of the canvas but also seem to aspire for order and meaning, as if emulating handwriting.

1. Your paintings always contain an equal number of interconnected vertical and horizontal geometrical elements. Do you consciously aspire to construct a carefully balanced sense of harmony and order?

I play by certain rules. I think all painters work within certain boundaries; it's difficult to imagine a totally free painting. Perhaps I follow more rules than most, as I always have these recurring horizontal and vertical blocks. I think of the geometrical blocks as figures or characters, so I associate the concept of harmony with the idea of contrapposto, the classic pose used in the visual arts to give the human figure a harmonious appearance through asymmetry.

I strive to break the symmetry by adding off-axis elements and deviations. Even so, I work very intuitively within the boundaries I set for myself. I keep searching until I find the shape or construction I am looking for, and when I find it, I try to give it a painterly form.

2. Your works have titles likeWoogie and Henrik. Are your figures an anonymous tribute to the legacy of portraiture, or do they depict existing people?

I invent titles for my paintings, and sometimes they happen to be the names of people. It relates to the fact that certain paintings have a distinct character or personality. Sometimes a proper name just seems to fit. It doesn't necessarily mean that the work is based on any particular person.
The titles are not intended to be clues for solving the content - they merely signify that the painting is worthy of a name.

3. Your compositions combine organic line with orderly, architectural form - do you see these as opposite elements?

My latest works incorporate handwriting or organic line that offers a visual contrast to the architectural forms. There are various reasons for its presence. Firstly, it adds a spatial dimension - when the line is behind the figure, it creates a distinct background, an illusory space. Secondly, I intuitively add accents to certain areas. When I add a line, it draws attention to that particular spot, like adding a necklace or earring. By accenting a certain spot in the composition, I throw the spotlight on a particular motif or visual idea.
I look at things from the viewpoint of a painter. I give a great deal of thought to the relationship between line and color. In my lead pencil sketches, lines imitate colors. I experiment with various linear patterns, and I imagine that a particular pattern might, for instance, evoke the color blue. I am intrigued by this process of drawing color and then painting it. This is how the line-form dialogue got started in my work.

4. The title of your new exhibition at Galerie Forsblom isCombinations, Variations, and Little Creatures.You said the title refers to a mathematical method, and to how form becomes a motif, and hence begins to convey meaning.

When you give someone a set of blocks to play with, they immediately begin to build something. It's only natural - you might even say it's an instinctive response for our species. I have thought a lot about architecture; we seem to make a distinction between what we call a city and what we call nature. I don't believe in a separate thing called nature. Everything is nature.
If a person builds a house, how is it different from a bird building a nest? When a bird makes a nest, we call it nature. Cities are the natural habitat of our species. Vertical and horizontal blocks have a very material presence. I intentionally paint them to look block-like, as if to suggest that they would be easy to move around.

5. Do you move around your blocks with deliberate intent until you find their perfect position?

I surprise myself because I work spontaneously. Afterward, I notice certain motifs and think "I like that, this interests me" - then I start giving it a painterly form.
If you do things too deliberately, you lose the dynamic tension. Also, if you try to rationalize what you're doing, you might end up finding that nothing makes sense. However, when you intuitively finish a painting, you can sometimes be surprised to discover that it has no distinctive personality even though you started out with something seemingly insignificant. That's a great source of motivation.